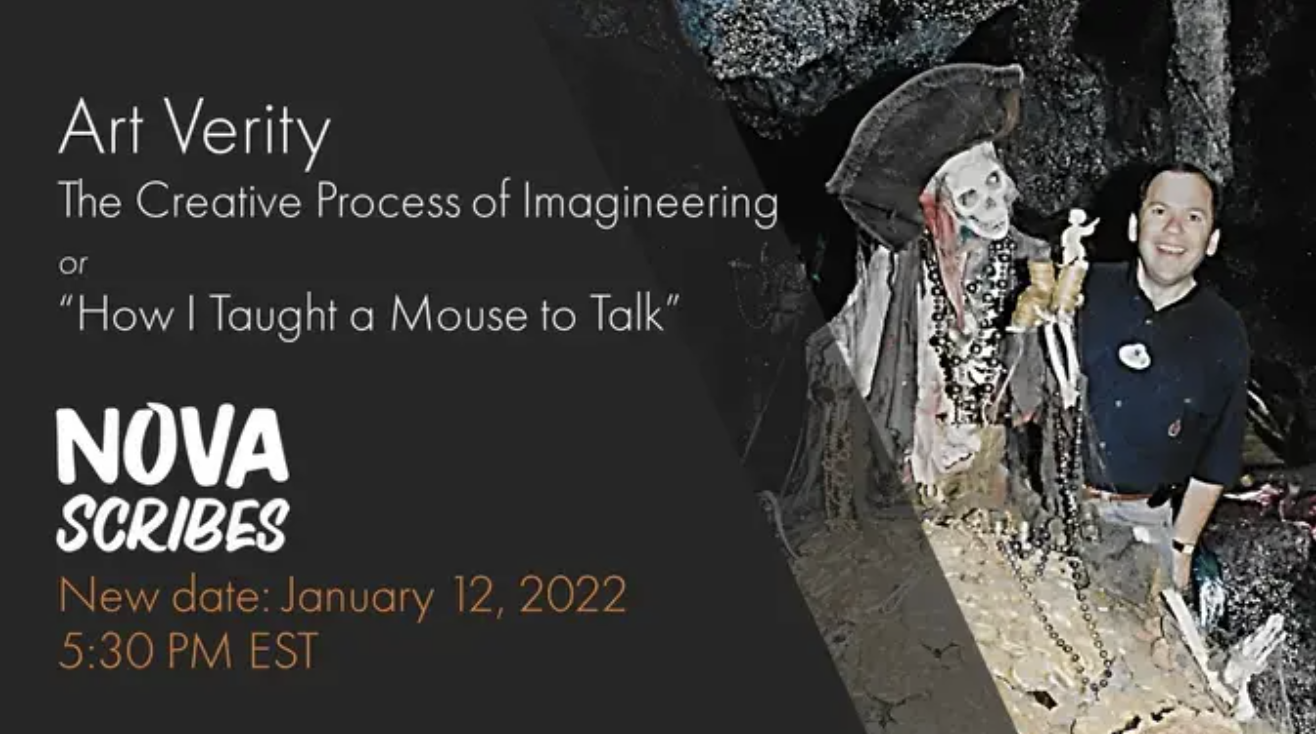 About Art Verity & the Creative Process of Imagineering:

Art Verity was a Disney Imagineer.

That picture is Art chillin' with one of the Pirates of the Caribbean. As in, the ride, not the Johnny Depp movie.

Imagineering is the creative engine that designs and builds all Disney theme parks, resorts, attractions, and cruise ships worldwide. The bring together artists, set makers, production designers, engineers, and ride designers all into the same room to design the experiences that make Disney... well, Disney.

And Art is going to tell NOVA Scribes how he did that. He'll cover the creative process of how they brainstormed ideas, facilitated the decision making, and designed the best rides and attractions on earth. He'll also talk about the importance of narrative story, and how we as visual practitioners can use the elements of storytelling to produce illustrations that reach our participants at a deeper level.

As Art shares, Brian Tarallo will be demonstrating the "chart talk" method of graphic recording: live sketching alongside a speaker to cooperatively design and delve into the speaker's message.

Art will also take your questions AND give feedback on how you might bring narrative story into your graphic charts. So be ready to share your favorite examples!

More about Art:
From his earliest days toddling through Disneyland, Art Verity knew that he wanted to be “part of the Disney magic.” In 1990, he got his chance to become a Disney cast member when he was invited to be a Show Writer at Walt Disney Imagineering, the exclusive idea factory that imagines, designs and builds everything that goes into Disney Theme Parks worldwide.

In his first assignment as an Imagineer, he joined a project team putting the finishing touches on the soon-to-be opened EuroDisneyland (now known as Disneyland, Paris). Working with a park sponsor, France Telecom, Art helped to seamlessly integrate France Telecom’s communication products and services into the visual vocabulary of Disney’s classic “It’s A Small World.” Art wrote a series of fun and entertaining vignettes for a post-show experience starring the Small World characters, who see their world shrink even further thanks to wireless communications from France Telecom.

In 1991 he found himself a part of the team that created “Mickey’s Toontown” at Disneyland. Putting words in Mickey’s mouth still rates at the top of the list of Art’s favorite creative missions as an Imagineer. Although Mickey’s “home” was a place that existed in the public’s collective imagination for years, it had never been realized in three dimensions. Art’s role in bringing Mickey’s world to life included: creating backstory and “painting” word pictures of this never-before-seen Toon mecca to aid the visual development; creating nomenclature and signage to add a sense of place and continuity; and writing, producing and directing audio-visual media and dialog intended to give the characters life and presence in Mickey’s Toontown.

After that, Art plied his story-telling skills on a wide array of projects. He helped give the Country Bears of Tokyo Disneyland a summer song to sing, created the “Disney Interactive Encyclopedia” for the Disney Stores, helped Pocahontas chart the wilderness of America’s shopping malls and made Goofy a sports legend at The Magic Kingdom’s “Main Street Athletic Club.”

Art went on to enjoy 8 years as a core member of the team that created Tokyo DisneySea, which opened at the Tokyo Disney Resort on September 4, 2001.

After that, Art became a freelance theme park consultant, still working on many Disney projects as well as a variety of themed entertainment venues for a wide variety of companies and organizations.

Announcements:
Proceeds from this event will be donated to the Whitethorne Foundation, which brings arts and arts education to indigenous peoples in the American Southwest.

This workshop will be recorded and posted on YouTube for anyone who cannot attend. You can find the YouTube link in the Comments section of this NOVA Scribes Meetup event once the workshop video has been uploaded to YouTube.

If you are interested in graphic recording this workshop for a small honorarium, please reach out to brian@lizardbrain.com. We are only accepting one graphic recorder: please let new practitioners have the experience if you are already an accomplished scribe. One scribe only please: first come, first served!